Geology, or geoscience, is the study of the earth which affects the lives of all of us. It is the fundamental science of mining and quarrying which have provided us with materials for infrastructure, energy and technology thus allowing the safe and economic development of our modern world. It also enables us to understand the causes of geohazards such as earthquakes and volcanic eruptions and how to predict and mitigate them.

Geoscience will be crucial in meeting future challenges to ensure access to clean and sustainable water supplies, geothermal energy and carbon capture and storage. By understanding past climates we can model potential future outcomes and impacts on the environment and natural hazards. 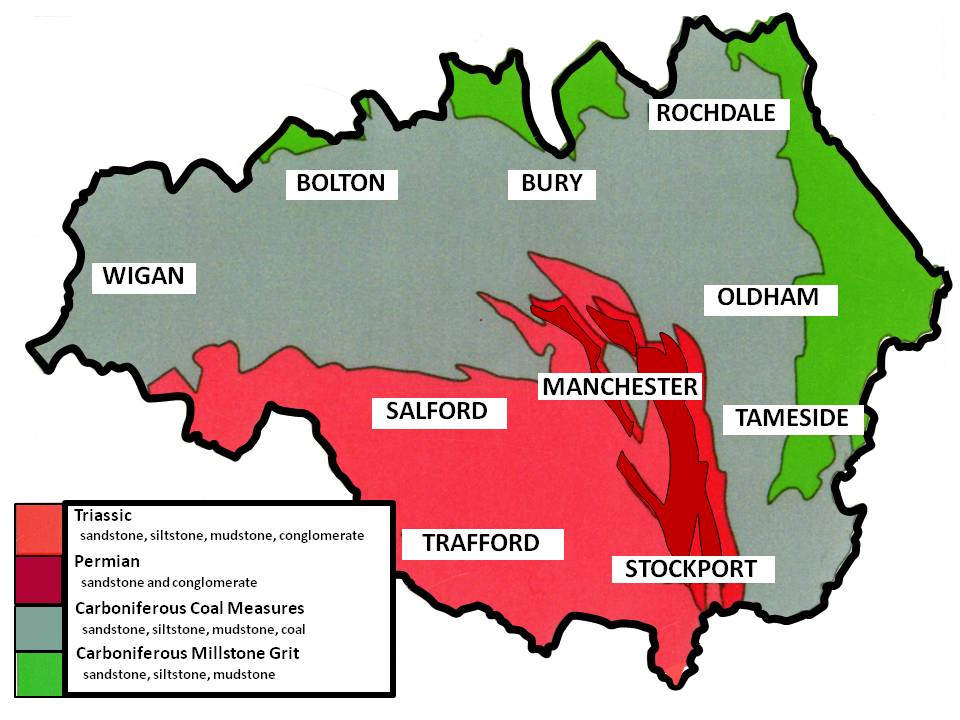 Our region’s geology spans 80 million years. Some 300 million years ago, sands and gravels were deposited in coastal deltas by huge river systems, seen today as gritstones around Rochdale and Oldham. Land plants colonised delta-top swamps, the remains of which were buried and compressed to form coal. These coal measures, successions of sandstone, mudstone and coal, stretch across the north of the area from Bury to Wigan and are evidence of varying sea levels mainly due to multiple ice ages at that time.

Britain then moved across the equator and arid desert conditions prevailed. Evidence of desert dunes can be seen today in the red sandstones to the south of the area from Stockport to Salford. Later, the rocks were sculpted by more recent ice ages and river erosion into the diverse landscapes found today around Greater Manchester.

To the east, the high ground of the Pennines forms a peaty plateau with rocky edges and deep valleys. The coal measures and red desert sandstones extend west and south from the Pennine edge to give a varied landscape of extensive river valleys and plains with lower-lying mosses, all influenced by glacial and riverine deposits. This wide geodiversity also sustains a rich biodiversity.

Agriculture alongside a domestic scale textile industry, aided by the exploitation of local building stone, brick clay, coal and iron, developed into the industrial, urban environment we see across Greater Manchester today.

Such a rich heritage of geology, biodiversity and industrial history for us all to enjoy and conserve for future generations.